Not all first responders show up to handle emergencies with flashing lights, blaring sirens and recognizable badges.  Some are simple men in orange shirts and helmets like West Coast Arborists’ Foreman, Francisco Villanueva, and his crew.  On May 24 they were called to McClatchy Park in Sacramento, California, to remove a fallen elm, but then unexpectedly discovered a wildlife emergency.

The elm had fallen onto a nearby tree in which there was a nest of a Red-shouldered Hawk.  The impact was enough to dislodge the nest and eject its four nestlings.  Because West Coast Arborists invests in wildlife-training for their crews to prevent, but also be prepared for such an emergency, Francisco knew what to do before he called Jason Pinegar, his area manager.  He gloved his hands and placed the four baby hawks in a deep cardboard box for safety. 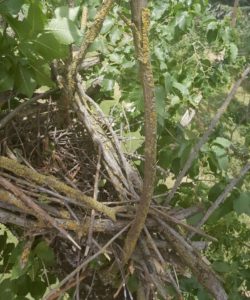 Jason took the second step they were trained to do. He called the nearest wildlife rehabilitation center.  When he did not get an answer, he drove the birds there.  No flashing lights and siren signaled his critical drive.  On arrival at the  Wildlife Care Association and Education Center the birds were immediately hydrated and then quickly dispatched back to their home site where Franciso and his crew were already in the process of reconstructing a sturdy nest using new branches and some of the old nesting material.  While the birds’ concerned parent circled above, the crew safely reinstated them in a nearby tree.  The crisis was handled in under two hours. 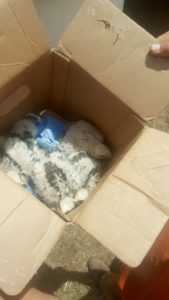 On June 7, after the crew allowed enough time for the birds to mature and leave their nest, they returned to the site to complete some minor pruning.  All four birds had already “graduated” from the nest and were testing their new wings in the park.  Who can read this and not clap with glee!

The Cavity Conservation Initiative, in partnership with West Coast Arborists, founded the Tree Care for Birds and other Wildlife project in California with the intent of setting best management practices (as this crew modeled) to reduce harm to nesting birds during tree care.  Over 140 participants, representing the arboriculture industry, wildlife advocates and many others are engaged to deliver these newly developed standards to the tree care industry throughout the State. 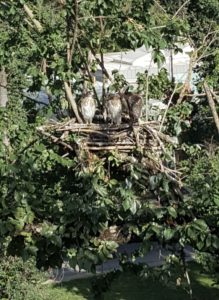 We are proud to promote Sims Tree Learning Center as a highly qualified trainer.  Their Wildlife Aware programs are available in northern and southern California.  One is scheduled at the San Joaquin Widlife Sanctuary in Irvine, CA. on 9 October 2017.  The Sanctuary is home to Sea and Sage Audubon (a supporter of the project), which in conjunction with the Irvine Ranch Water District, the property owner, is generously providing their beautiful Learning Center for the training.    Reservations for this date or others can be made by contacting dawson@simstlc.com or scheduler@simstic.com.