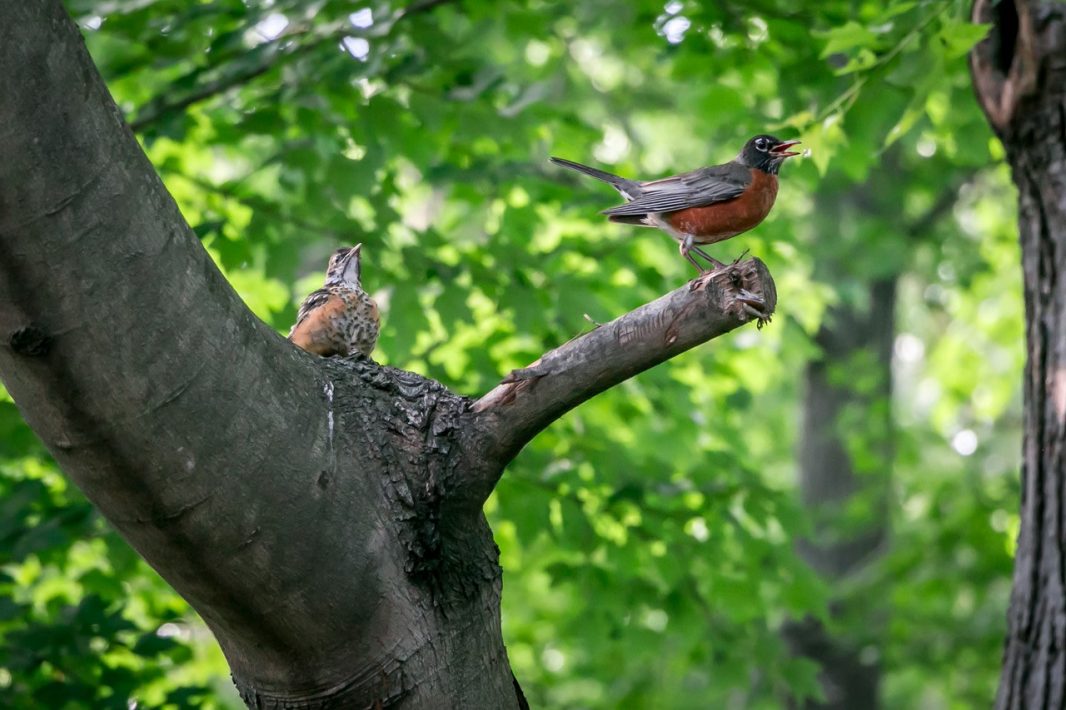 As American as apple pie, vanilla ice cream and the national anthem, the robin is an icon of urban backyards, parks, farmlands, fruit orchards and clearings in forests. Its melodic warble, “Cheerily, cheer up, cheer up” spills from tree tops anywhere there is short grass or meadow. Thirty-three poems have its name in their title. Poet, Mathilde Blind best described its song: “A blending of hope and resignation.” Robin vocalizations are learned from parents and neighbors. But every robin adds its own song elements. This vocal variance raises the question again and again, ‘Is that a robin I hear?’ I always want to know. Each one is a call from home. 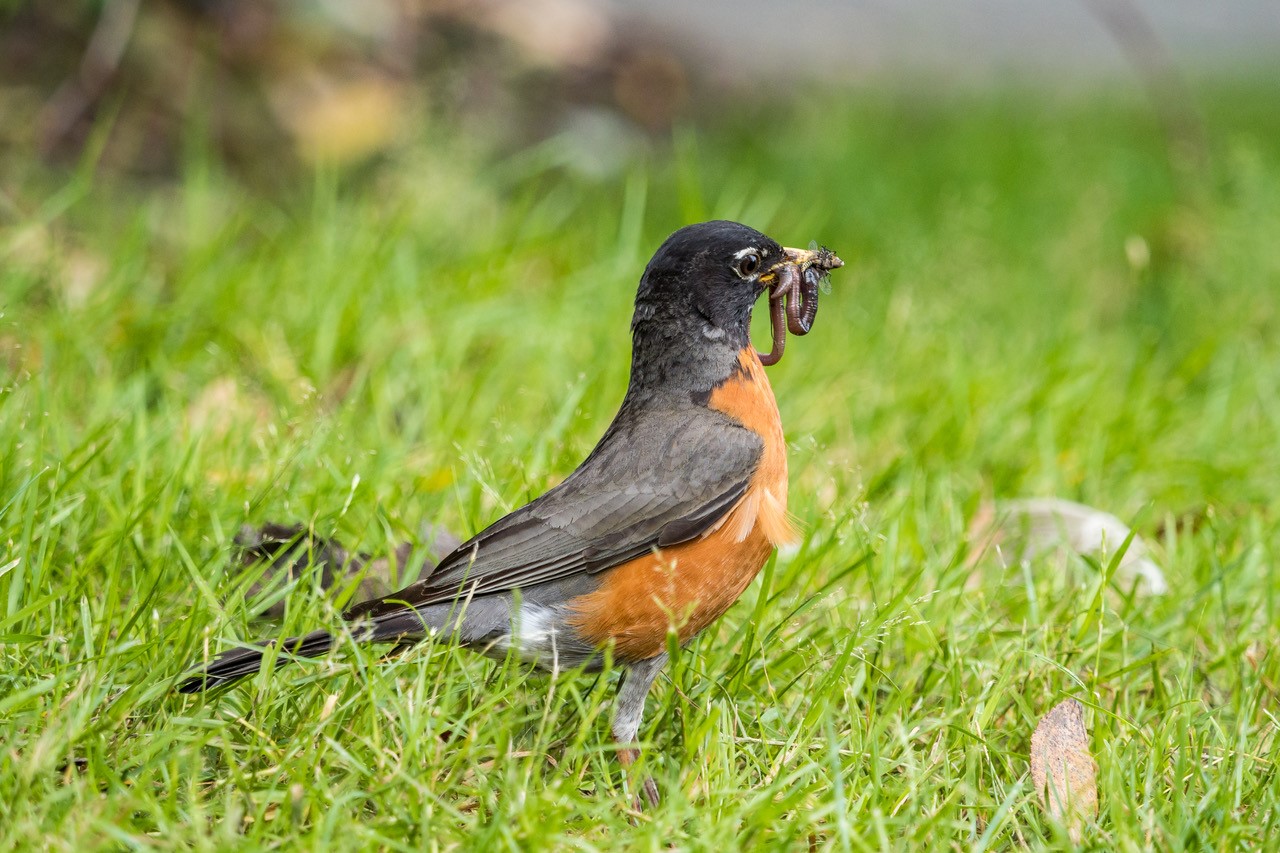 Though mostly a ground forager, insects are taken from foliage and in flight.
Photo by StoneMonkeywk

When foraging on the ground the bird’s manner of movement reminds me of a ballerina. With chest and chin up, it rapidly scurries forward with small steps. And then, as if hearing the music stop, it holds itself very still and alert. By progressively darting and stopping this way, the robin scans a new patch of lawn to listen for burrowing earthworms and other grubs. If you see a robin’s sudden nervous fluster and hear a ‘chup’ or ‘yeek’ call, danger is nearby. Even non-robins recognize the warning. 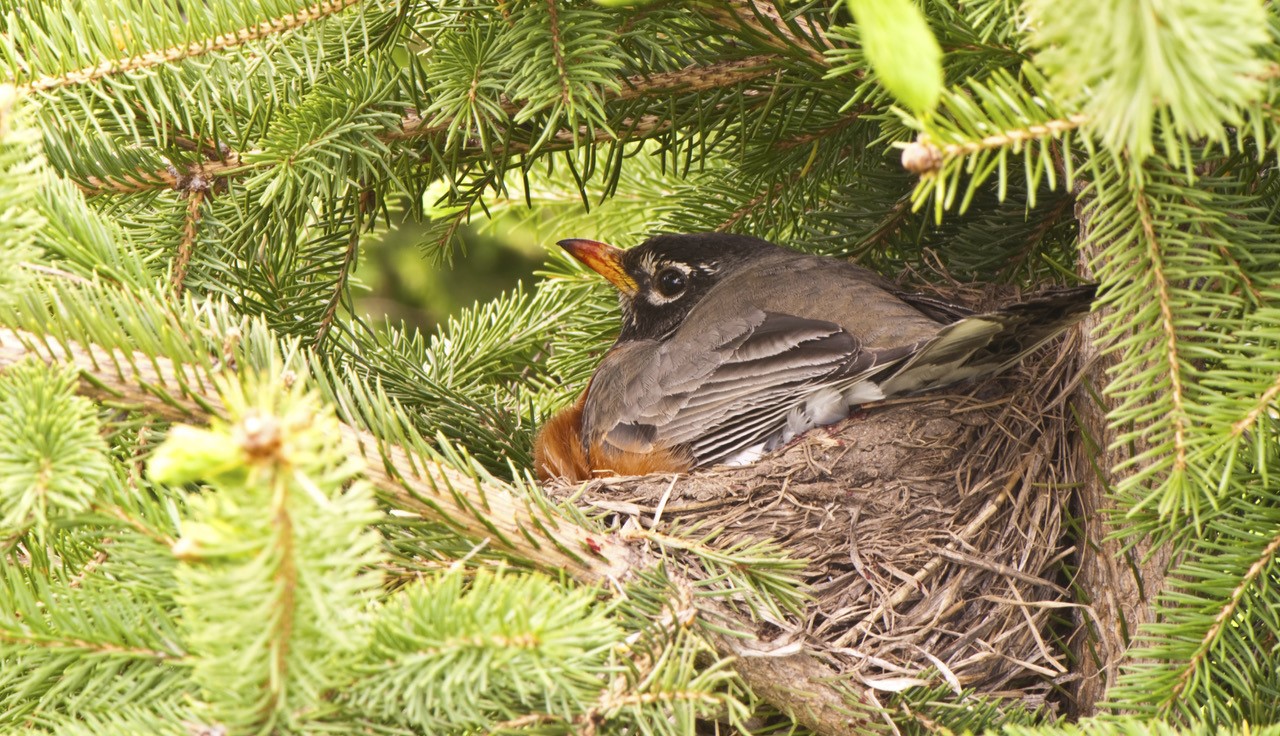 Females often build cup nests on a firm limb or tree-fork with substantial overhanging foliage—a reminder to look closely before pruning trees in the nesting season. The species’ unmarked, sky-blue eggs are so well recognized that a paint color has been called ‘robin’s blue.’ Two or three broods are possible between April and August. The first nest may be used as a foundation for the second, so leave it in place if you can. 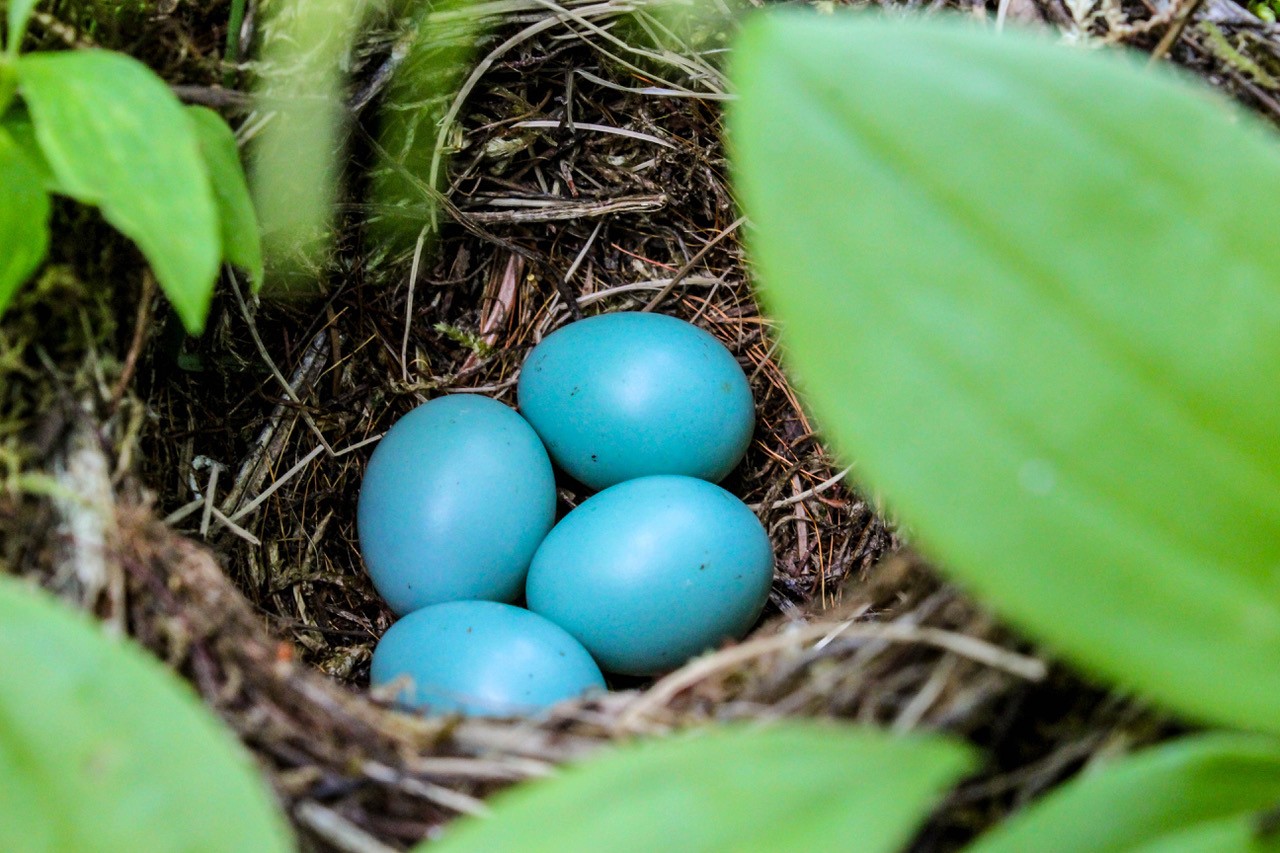 Nests may also be found on the ground or tucked within human structures.
Photo by Sameit

In fall and winter large roosting and fruit-foraging flocks are observed. It appears that staying together is more efficient when tracking sources of fruit. In the west, cultivated grapes and cherries, mistletoe, juniper, serviceberry and toyon are among those consumed. Unfortunately, mitigation efforts need to be taken to reduce fruit crop damage. While some individuals stick close to their home range in winter, others migrate thousands of miles. This makes robins effective seed dispersers, even of non-native plants. Yes, when human interests conflict, a species’ versatility can be costly. 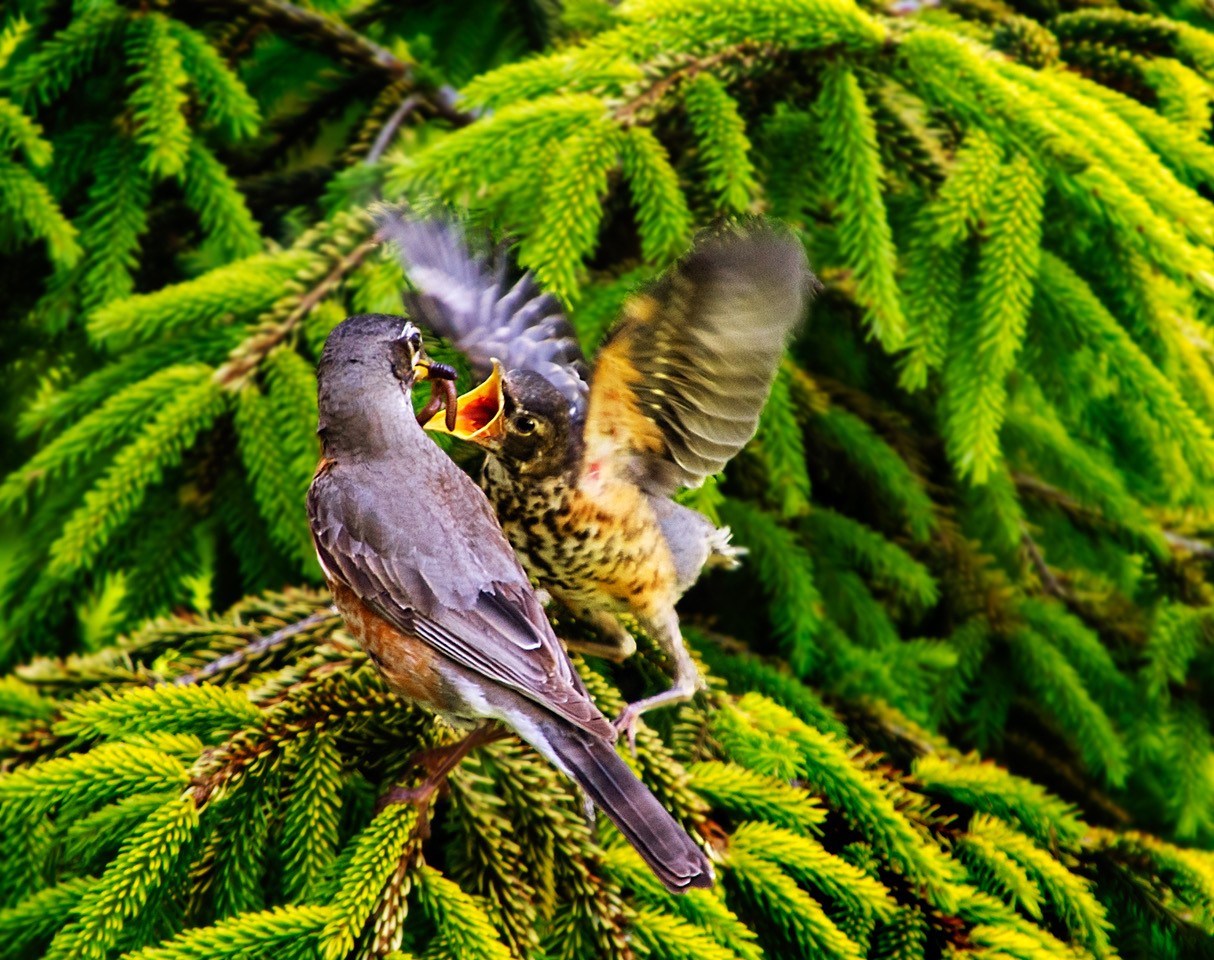 Author Rachel Carson revealed that the robin was one of the earliest birds to alert us of the unintended consequences of DDT. It (and others) suffered significant reproductive failures and population decline because of ingestion of the chemical. Its habit of foraging on the ground and in fruit orchards puts it at higher risk of pesticides and outdoor cats. 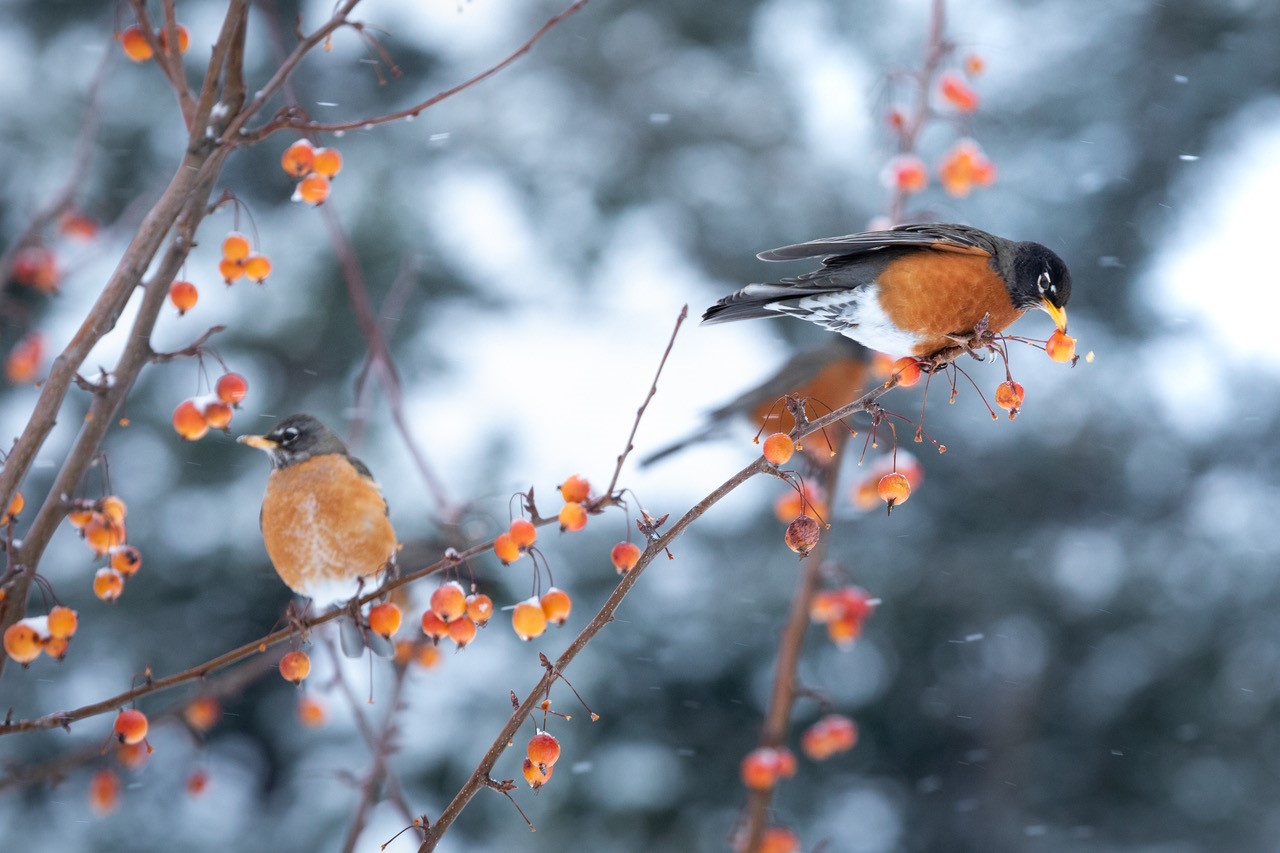 In fall and winter the robin’s diet switches from insects to fruit.
Photo by VDB Photos

Today the robin is in service to our country. Scientists are tracking them by attaching electronic transmitters to their backs and recapturing them. Data will reveal where they are picking up ticks infested with Lyme disease, as well as information about weather, climate, and land transformations. This will be helpful in forecasting disease outbreaks and other threats.

I hear a chuckle coming…but I am sincere in saying that I would be delighted if the ubiquitous robin replaced the Bald Eagle as our national bird!